The Creative Practice of Jeannette Petrik

The Self-Organisation and Institutionalisation of PostNorma
Published in Uncube Magazine as "Squat gone Square-Institutionalising Activism in Amsterdam", November 2015

Until its criminalisation in 2010, squatting was legally accepted in the Netherlands. Squatters gained legal rights to the use of a property while squatting was widely accepted as a socio-political practice. Today, less than five years after its criminalisation, squatting is still possible through means of appropriation and negotiation and allows for individuals to surpass standards of economic wealth while creating an environment of abundance - a relative concept – with given means.

PostNorma is a recent example of an 'art squat' founded in Amsterdam in the context of an artistic project which set out to become a breeding ground for personal and communal cultural development. The initiative from students of the Sandberg Institute, squatters and travellers transformed the empty shell of a building on Papaverweg in the North of Amsterdam to become an open and accessible project space for living, working, exhibiting, lectures and parties.

While the project consciously embraced “taking the right to act in your own hands to work for your and each others independence”, it was indeed initiated by Reinier Kranendonk as part of his graduation from the 'Dirty Arts Department' at the Sandberg Institute. As such, it grew from the idea to create a self-organised DIY space to become an institutional part of the educational environment it was embedded in – at its roots, the project embodied a seemingly obvious conflict, that between self-organisation and institutionalisation.

As artist Joep van Lieshout describes the free state that he set up in 2001, he speaks about the attitude of “just making it”, which Kranendonk describes as an ideological, liberating practice of directly applying ones ideas, which also formed the basis of PostNorma. For van Lieshout, “just making” allowed for the creation of an independent space that maintained its 'self-sufficiency' for 9 months. The inhabitants of the freestate of AVL set up a power plant, water purification systems and decided that there were not going to be any rules on the piece of land they had squatted. “You could do whatever you wanted.” This potential for the development of free thoughts and actions seems to be integral to self-organised initiatives – doing whatever one wants as a prerequisite.

Van Lieshout speaks of squatting as a necessary rebellious act for the creation of an autonomous space. The radical questioning of conditions of modern life, such as notions of ownership and its legality, concepts of work and inequality, and the notion of social hierarchy and authority is the basis of any squatting action. From the lose and open structures of squats, projects of vision may emerge, bearing potential for change.

With the act of breaking a building's lock, one surpasses legal and social standards of ownership and social hierarchy. Kranendonk speaks of “squatters as pioneers who dare to question prevalent structures” and create extra-legal affordable living situations. Hakim Bey's Temporary Autonomous Zone continually serves as an inspiration to those seeking to be “wild children.”

PostNorma emerged as a student-run space for living and artistic engagement which was inhabited by art students and travellers over the course of 13 months. “I like to keep things simple, I like to understand them”, declares its initiator in his thesis. The practice of self-organisation of a project space such as PostNorma involves making things happen without dealing with the complexities of bureaucracy. As Kranendonk calls out in his thesis: “Begin to think, begin to talk, begin to write, begin to act, begin to do, begin!” Beginning to question one's prevalent condition in a given social and cultural context together with others with similar attitudes, would allow for the development of change by discovering the roots of needs and possible re-definitions.

While self-organised spaces may sometimes lack structure and tend to give way to chaos, active participants seeking to unfold their own and space's potential may initially experience a lack of common luxuries of modern commodities. This was also the case for PostNorma. While other groups of squatters are often comprised of individuals with complementing skill sets which extend to building and making, setting up electricity, heating and water and the creation of public visibility, the participants of PostNorma mostly started out having only few experience in building maintenance. Still, the group's members evolved to learning from and supporting each other. “While working on a building and on organising events, one simultaneously works on social structures,” describes Kranendonk.

The artist and squatter speaks of his experience with PostNorma with both scepticism and excitement. Initially, he says, it was difficult to motivate peers to engage with the space. Common expectations to what a liveable space is were initially in the way of seeing the space's potential, he says. Only as the space evolved to become a place for creative activity the Sandberg Institute recognised the place's potential and started organising events such as lectures and exhibitions there, while supporting the project-space with material donations such as gasoline.

PostNorma has ended with the demolition of its location in July this year. Learning from this experience, the Sandberg Institute has understood the value of a student-run, semi-public initiative and is working on adapting the concept for the future. Understanding empty buildings as open spatial frames would allow for art students to unfold their creativity and experience their limits under the conditions of a reality that goes beyond the safety of an art school. Still, the development of such a project is highly dependent on its participants, says Kranendonk. He wonders if many art students dream of having a free space or whether they're 'okay' with how things work in society. The curiosity to explore possible models of change on a small scale requires a large amount of commitment which cannot be imposed. Whether an institutionalised 'squat' bound to the logics of economic viability and regulations would, therefore, be as successful in developing a criticality towards societal norms and standards as a 'naturally' grown squat could, remains questionable. As Kranendonk says: “PostNorma began from the bottom up, this new project would work from the top down.”

While an institutionalised 'art squat' could allow for participants to develop their practices in a spatially generous environment with support of experienced educators, having to make the project financially viable would be an issue that other squatters wouldn't necessarily have to deal with. Budget plans involving initial costs, costs of maintenance and events, income generated through events and renting of spaces as well as a fee for the caretaker of the project would have to be negotiated alongside the place's socio-cultural aims. More informal squats don't need to bother occupying themselves with such economic considerations as they tend to operate in legal grey zones and eg. don't need to comply with Health and Safety standards.

Kranendonk describes that usually, it's the first people involved in a squat that carry the project, that are most motivated and end up being most involved. Taking the action of breaking the lock and, therefore, the active engagement with 'taking' a space away from a project might result in less exciting developments and may not foster a DIY mentality.

Clearly, the above depiction represents a rather idealistic point of view towards squatting culture and weighs its emancipatory potential as more valuable than the stigmata often attached to it. Of course, there are examples of squats which have distanced themselves from ideals of independence and have rather evolved to become places where destructive patterns prevail. The enforcement of regulations and organisational structures from the outside might prevent such developments and help participants to feel 'safe' under the guidance of an institution but, at the same time, a project's potential for radical change would certainly be compromised. The roots of an institution are just simply deeper than those of self-organised initiatives and are, therefore, more resistant to experimentation, spontaneity and improvisation – common characteristics of self-organised environments where ad hoc solutions tend to provide first steps towards more sustainable socio-cultural developments. 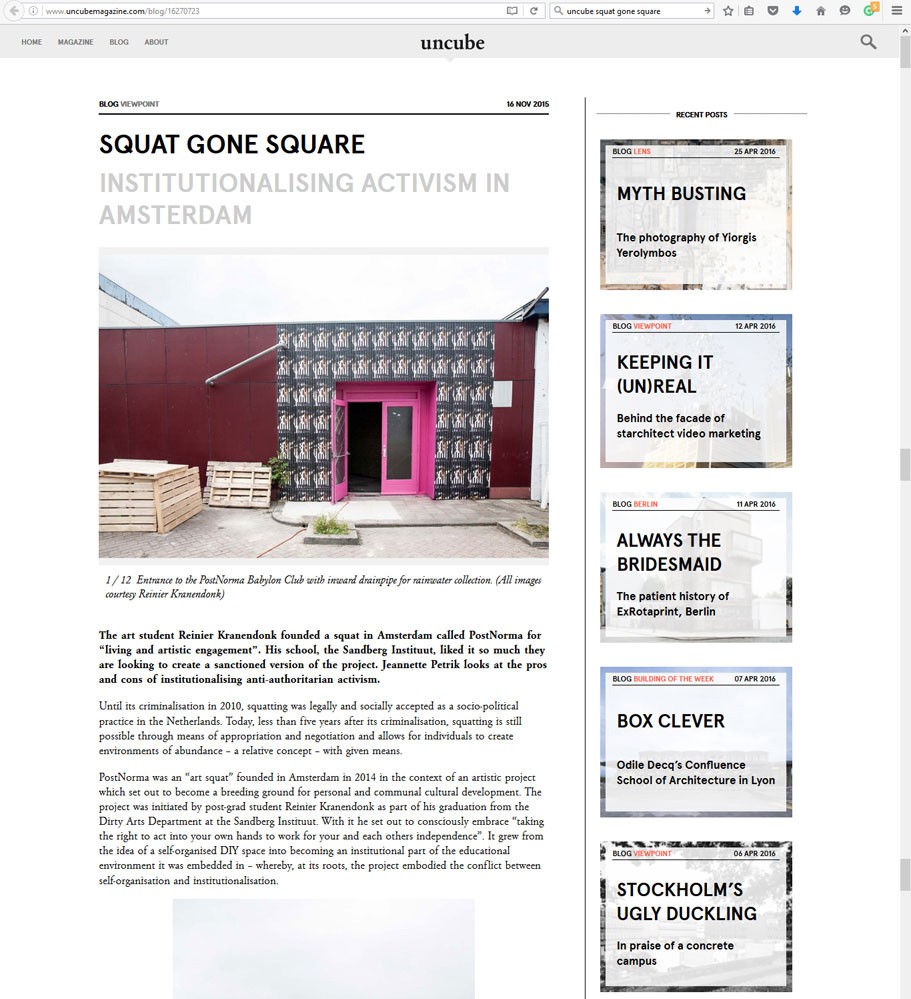 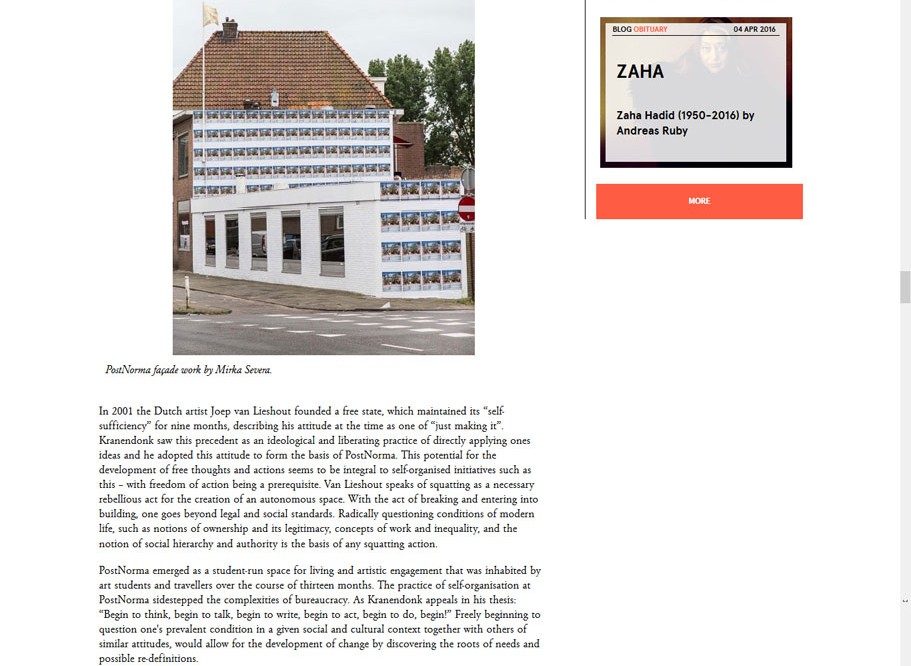 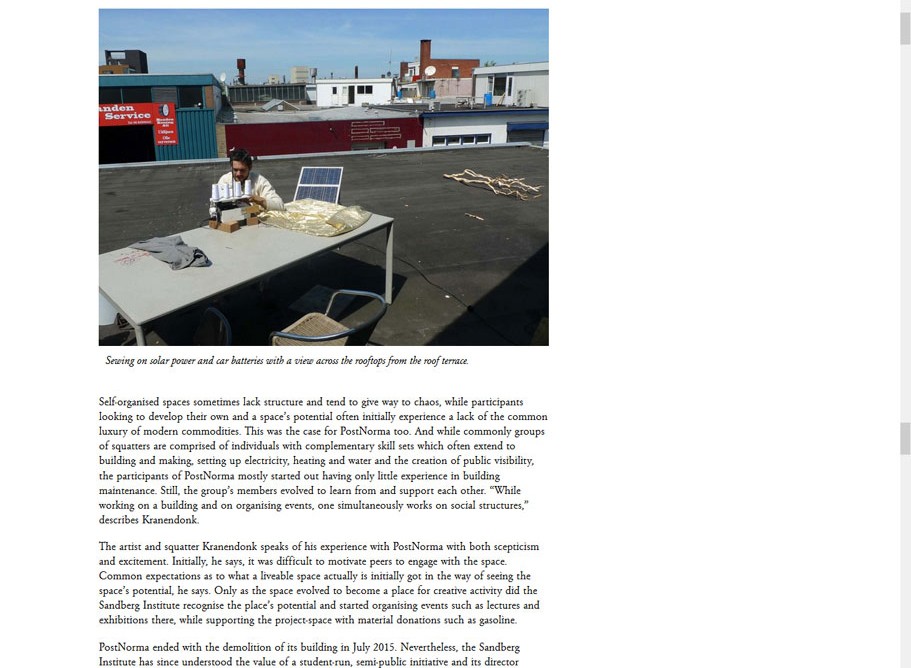 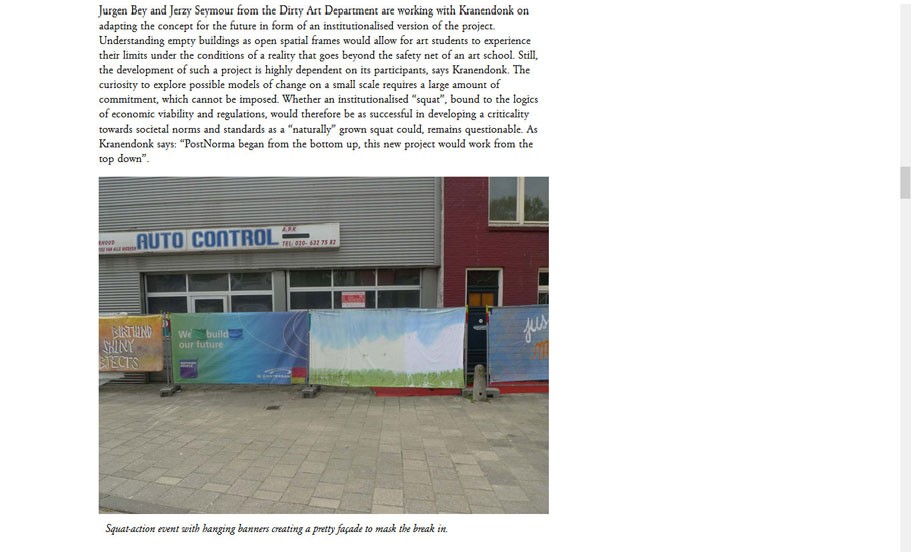 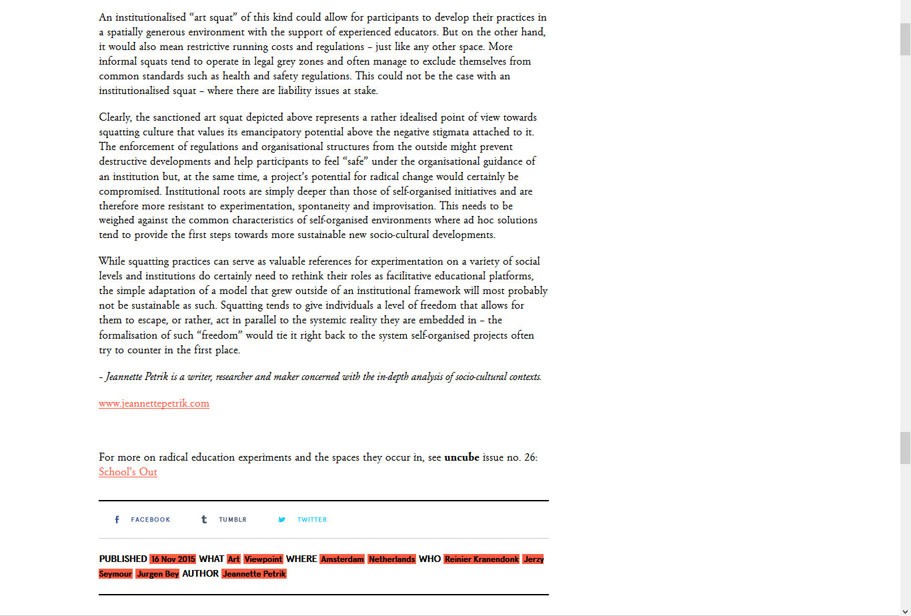